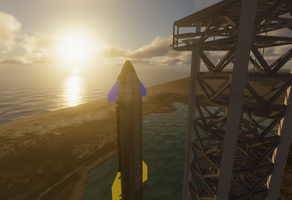 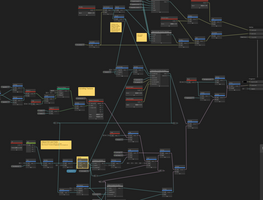 I have converted the Unity project to the High Defintion Rendering Pipeline (HDRP). What does this mean?

In HDRP the rendering process works slightly different than in the default rendering pipeline, giving you much more control on how to setup scenes. That also means you need new shaders and materials and have to convert all of them. Not all will work exactly the same as before. The flame shader I set up newly in the now available built-in visual shader editing tool. This took quite a while, but I can now modify shaders quite easily. The tool helps a lot. See attached picture for example.

There are much more options available now on how to setup lighting, shadows and reflections. There is also more volumetric stuff, like clouds. Figuring out how this all works and impacts performance also took quite a bit and is an ongoing process.

I really like the physically based sky and auto exposure mode. It makes for some nice sun sets. There will also be nights in the future.

Another big area was converting the effects. First I tried rebuilding it all with the VFX graph tool, another visual editor. It's really cool, but only quite far in I realized that the effects run on the GPU and therefore have only very basic collision detection support. So in the end I only created the ground dust clouds with it using some rough static colliders for the tower and mount. The venting effect I had also converted, but couldn't get it to look like the old one, so in the end I just went back to the normal particle system. For the explosion I didn't even try.

While converting the effects I used the opportunity to improve them a bit, especially the ground effects. There is also a decal now where the flame hits the ground so that it starts glowing at the impact spot. While at it, the lighting from the flames was also improved.

Then I worked a bit on the terrain. But it's an odd system. Need to invest more time to fully figure it out.

What's also nice is that the built-in clouds and a simple water shader from the asset store, both work also with VR. So no switching around anymore. There is also a huge upgrade for the HDRP water in the making by Unity. So I won't touch it until this is out. The clouds should also get some updates. Can't wait!

Now I want to test a bit more also the builds for the other platforms. Maybe add a little bit of new stuff. But not much so that I have the official release for all platforms by next weekend or so.

After that the next major thing to add is raytracing. It's easy to activate, but will need lots of testing and setting up to get an usable result. But I always wanted to do something with raytracing as soon as I a saw the legendary "It just works!" RTX presentation. So this is a really good project for it :)

After fixing a myriad of bugs the final HDRP update for all platforms has been finally released now. No extra devlog as there isn't that much to say.

There is a night mode now and you can fly Starhopper commemorating the third anniversary of its first small hop.

Also some small improvements on the catcher.

A bit of a headache was to get the control panel mouse interaction to work on both Windows and Linux. Apparently, it works slightly different on each system. If you warp the cursor on Linux it also sends a mouse delta event, which it doesn't do on Windows. So when you look at the control panel I center the cursor manually while blocking rotation from the mouse delta for a frame. In that way it also works on Linux mostly.

In the process I also installed the Linux version of the Unity editor, and it went  pretty smoothly! I could just open the same project which I used before in Windows and work with it right away. Pretty amazing, that we are at this point now with Linux and cross platform operability. And it even was the newest beta version of Unity.

Another annoying problem was performance issues with the volumetric clouds at larger screen resolutions. I had to do quite some profiling until I found all the problems - or rather - had to learn how to profile. After I knew what I was doing, it was quite easy to figure out what was happening :D