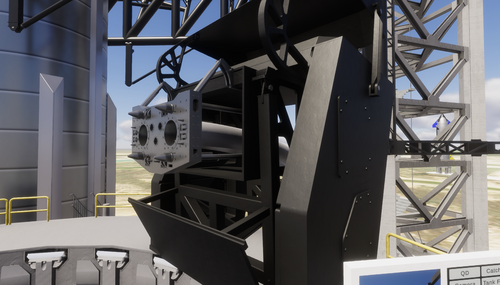 Before work on the tank farm can start I had to do the QDs to be able to load the rocket with propellant in the first place.

Big thanks to Owe for letting me use his Booster QD model. It's a bit old though and didn't quite fit in some places for rigging it properly, so I had to do quite a few adjustments in Blender myself. While messing around in Blender I used some parts also for the Ship QD, so that's good. Looks a bit scuffed maybe, but I hope I get a good version from some Blender Pro together with the QD arm some day.

The QDs are fully physics driven. Setting them up proved difficult. While a full hinge joint setup worked ok for the booster QD after quite some tweaking and realizing that I have blocked myself with colliders here and there, for the ship QD I had to use articulation bodies as it is sitting on the articulated arm. This results in some awkward solutions where I am still wondering if it's really the way to do:

Besides this there was also a big refactoring to be able to derive booster, ship and hopper from one base class to use them easier with the tank farm and prop stuff. It took quite some time to get it right. There hasn't been a huge benefit yet, but I hope it helps in the future.

- removed static fire toggle (just set thrust to 0, if you still want one)

- some smaller adjustments here and there, e.g. on the lighting (night is still pretty scuffed, but it has no priority and just takes soo long to get a good setup)

p.s.: As much issues as Unity might have, there are some really cool things, which are still always amazing to me, like I can just boot into Linux and open the same Unity project, that I just used in Windows, in the native Unity editor application for Linux and continue right away where I left off in Windows. That's super cool!

btw, the build size increased so much because I added the Raptor model from Alex Svan directly to it. I might just make it separately downloadable in the future.