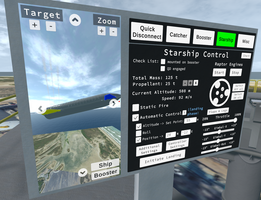 The title pretty much contains everything new:

- booster is now also on articulation body setup using aero drag, and there is a new shiny 33-engine version (I don't like how the reflection works, though. I don't know if it can be improved much in the built-in render pipeline. But since I want to switch anyway, I didn't spend much time on it)

- dust is swirled up dynamically by the raptor flames

- some smaller stuff like that you have more control over the clamps now (you can pause them by clicking again on the extend/retract buttons), new water which also works in VR, and more which I cannot think of right now

I noticed a huge bug on the WebGL build, where you don't have propellant when initiating a landing. It's fixed now. Apparently not many use WebGL, because nobody reported it. That's fine. When I switch to HDRP, I cannot do WebGL builds anymore anyway :D

The war in Ukraine got me distracted quite a bit. Otherwise I would have had this update out a bit earlier. However, the implications of a war like this, especially when it develops into a massive loss for Putin, might be huge not only for Russia, but also the EU and Germany. Let's hope it ends soon.