You can move the gun, load it and fire it at a target, which shoots back. It's very basic, but better than nothing.

The basic game play is unchanged in the new version 2.0. It's mostly a graphical update (for the PC versions) with some optimizations (for all versions) so it should run much smoother now. On Windows (not WebGL version) you can now also try ray tracing or play it in VR. I still need to work on the textures some time.

Besides that, there is also a start menu now and some new audio to give it a little more historical touch :D

There is no builder program for this as I won't spend much time on this game. Just give a little back, if this is of value to you, if you can. The more money I get for this, the more time I will spend developing it further.

Main version is for Windows 10, where I am also developing on (should also run on other Windows versions since 7). Other builds are less tested. Check the download instructions if you have problems. The old WebGL version is still available for nostalgia.

Besides downloading the zip, there is also the Itch App (similar to Steam) for all platforms which does the download for you and provides more features, also for keeping the game up-to-date.

Mobile/Phone Version: Maybe in next update. The web version should run on any platform already. But there are no mobile specific controls yet.

VR works only in the Windows version. It uses OpenXR, so it should run on any headset that supports it, hopefully. It's tested with an Oculus Rift CV1. Enable VR mode from the main menu.  VR is pretty basic still. So don't go in with too high expectations.

Standard WASD control with Space to jump and LeftShift to run. ESC for menu to change quality and other settings. Reduce quality, if it runs slowly.

Hardware requirements: It runs fine on my laptop with a Ryzen 3 4300u on low quality (high is already a little sluggish though). For ray tracing and such you should have an RTX2060 or higher.

Your system also has to support DirectX11/12 on Windows, Vulkan on Linux and Metal on Mac.

If you have problems starting the desktop version, check this thread.

If someone doesn't want their stuff to be used, please let me know.

so this is how ww2 german veterans felt

Well, I don't know about railway gun operators, but I read books from WW2 German tank drivers and Eastern Front soldiers. One of them was involved in the Battle for Sevastopol and mentioned this gun. I should actually look it up again and include it in the description as it was my main inspiration to start with this project.

also, the thought of the enemy slowly knowing your position is terrifying

not really, just need a lot of patience as zeroing in on the target takes a while ;) Maybe I adjust it a bit or do some other tuning, when I am at it again. I want to do a little update in October.

btw whats the rate of turn of the train track in this game?

nice artillery game, having too move the gun instead of turning it is so challenging

Thanks! iirc you don't actually need to move it on the tracks. But I might be wrong. I haven't played it myself in such a long time, that even I don't remember :D

How Do I Even Fire The Gun?

Well. That's for you to find out. But I can give you some hints. Climb up the ladders and look around. You will find some levers. Try them out. One is for loading the gun. You have to load it first and every time between the shots. It's annoying, yes, but that's what it was back then as well :D

Hey ashtorak, great project, could you maybe consider making the tracer bigger and the Stuka invisible? Its often obscuring the view of the shell. And/or making the zoom, zoom further? ;) 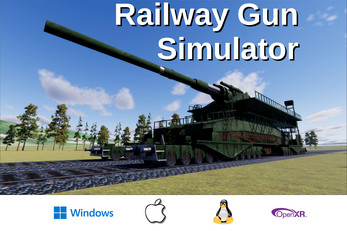